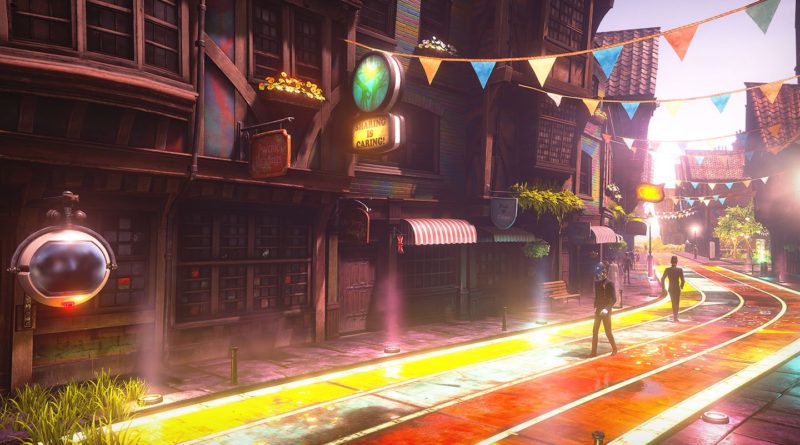 One of the newest members of the Microsoft development family, Compulsion Games has been working on the dystopian action adventure We Happy Few for quite some time. What began as a procedural roguelike has morphed into a much more narrative-driven experience, and considering its fascinating backdrop, hilarious dialogue, and menacing enemies, that was a wise decision.

Having recently played a 45-minute demo of the reworked game, we came away excited at its potential, enamored with its writing, and slightly creeped out by its unsettling characters.

Set in an alternate version of 1960s England, We Happy Few tells the intertwining tale of three rebellious citizens trying to escape from the city of Wellington Wells. A drug called Joy has been forced upon the populace, turning otherwise pleasant peasants into stressed-out sheep cowering under an authoritarian regime.

We played as former journalist Arthur Hastings, who awakens from a Joy hangover to find himself lost in Wellington’s maintenance tunnels. After making our way out, we emerged in the colorful and seemingly tranquil district of Barrow Holm. Dotted with abandoned homes, Barrow Holm is a fully explorable, open-world area, underscored by a sense of desolation and sorrow.

We retrieved a map at the top of a lookout tower, directing us to a buried treasure a few yards away. We picked flowers that we could eventually craft into helpful items and wandered through the remnants of the district’s former inhabitants. A nightmarish stuffed animal tea party sits in the middle of a field. Children’s toys are strewn about, dirtied and torn. Despite the cheery colors, something very, very bad happened here. Picking up tidbits of narrative, we eventually bumped into a resident who offered us a way out of Barrow Holm in exchange for a few items required to operate a gate.

The demo shifted gears here, as we were asked to infiltrate the well-guarded camp of a local gang. We Happy Few doesn’t shy away from action; after sneaking into camp, we were caught red-handed and thrust into a ridiculous, makeshift fighting pit where we learned the ins and outs of We Happy Few’s melee combat. Grabbing a large stick, we went mano a mano against a frightened fellow named Danny Dafoe. Danny turned out to be a former co-worker still angry at us for making fun of his lousy writing; given the choice between a non-lethal club or a decidedly deadly pointy stick, we went with the club. Danny might have been a jerk at work, but he didn’t deserve to die.

Or perhaps he did? It’s up to the player to make these sorts of decisions in We Happy Few, each having ramifications the further you press on. We weren’t as kind to the remaining guards, using a combination of stealth and straight-up roughhousing to take out the baddies, steal the requested items, and hightail it back to the gate.

Our next stop was a dilapidated village overrun with aggressive locals (colloquially called “wastrels”) strung out on Joy. Starved and wearing tattered clothing, the wastrels didn’t take kindly to our fancy duds. Only after finding a few key ingredients could we properly dirty up our suit and conform, though not before accidentally (and optionally) throwing down with a few wastrels guarding a treasure chest.

Ultimately, we opened the gate and made our way to the train station, though getting there required a combination of smart stealthing and plenty of fleeing. Taking on multiple enemies at once isn’t a great idea in We Happy Few, especially when they have billy clubs and you have an (admittedly sharp) umbrella. But fight we did, until we entered the train station.

As we tussled with more guards, we endured several flashbacks about our lost brother Percy, regretting our decision to leave him in the clutches of the authorities to save our own skin. We also meet the gruff, potty-mouthed Ollie, who has taken up residence in the train station and is defending his position from wastrels. When we finally reach him, it’s revealed that Ollie is an old neighbor who may be our only way out of this deranged town.

We still have a million questions about We Happy Few. What was life like before the occupation? What made neighbor turn on neighbor? How in the world did the world get like this? The demo hints at life before wartime, but with two more playable characters and over 20 hours of story in front of us, there’s a lot more discover when this strange, well-written game finally arrives on Xbox One August 18.

Enjoy a Multiplayer All-Access Event With Minecraft: Xbox One Edition

May 18, 2017 Duncan Nagle
We use cookies to ensure that we give you the best experience on our website. If you continue to use this site we will assume that you are happy with it.Ok